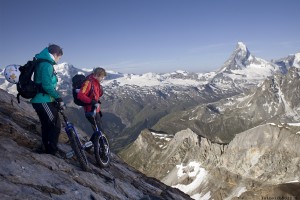 An exposed peak, steep gravel fields, and slippery trails on a glacier – where you would hardly meet people walking on their feet, Lutz Eichholz and Stephanie Dietze recently dared the first descent on their unicycles. They rode down from the peak of 3406m high Mettelhorn to the valley of Zermatt, Switzerland. 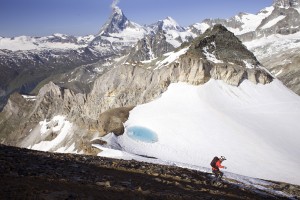 Eichholz’ goal was to ride at least 90 percent of the trails. If a section was too technical to do it onsight, he would go back to do it again. Due to unexpected snowfields near the top, that are very unusual for that time of the year, he didn’t quite reach his goal. But Eichholz says he is satisfied: “Apart from some off the dangerous snowfields I was able to ride down every part of the mountain.” Which, oftentimes was on the border to what’s possible on a unicycle. “Somehow, I could do it every time. Every meter was a challenge – but that’s what makes it exciting.” 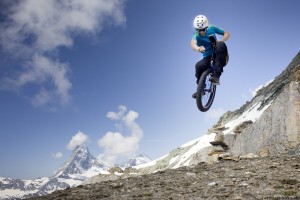 While trying to find the hardest, still rideable downhill of the Alps, Eichholz and Dietze constantly set new records on their wheels. Stephanie Dietze is known for being the first female unicyclist riding in extreme alpine terrain. “I am always looking for new challenges and ways to find out where the line is – for me and for the sport,” says Dietze. 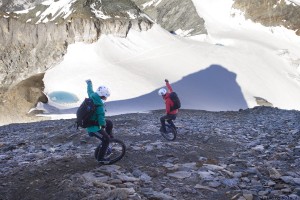 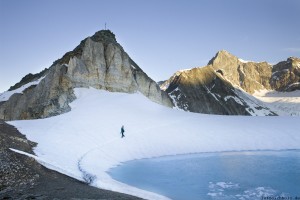 LUTZ EICHOLZ (27) and STEPHANIE DIETZE (27) have been passionate unicyclists for over 16 years. Four years ago they started taking their wheel into alpine terrain. During trips down Germany’s highest mountain Zugspitze, Cima Ombretta Orientale in the Dolomites and across the Alps they have proven that they are true masters of one wheel. Thanks to their spectacular stunts as well as many national and international titles, they have managed to push the borders of what’s possible on one wheel further each season.