Last year I travelled to Mount Kinabalu in Malaysia for a Multi-Sports Project. Here’s my story about this great and adventurous trip. Thanks to Sebastian for translating into english and Oliver Vötter for the Pictures!

Mount Kinabalu has a huge summit plateau that looks like a recently set, gray lava stream. The highest spots soar like towers from the plateau and add to the surrealistic view. Slightly below the plateau the first vegetation zone begins, which at about 3.300 m above sea level merges into one of the oldest rainforests in the world. Frequently, clouds soar into the air and change the viewing conditions every minute. As I stood on top of the mountain, the details engraved themselves into my mind and I experienced one of my greatest and highest sunsets ever. Being able to climb that peak equipped with my unicycle and trying the descent from the top were things I had only hoped for a few hours earlier. 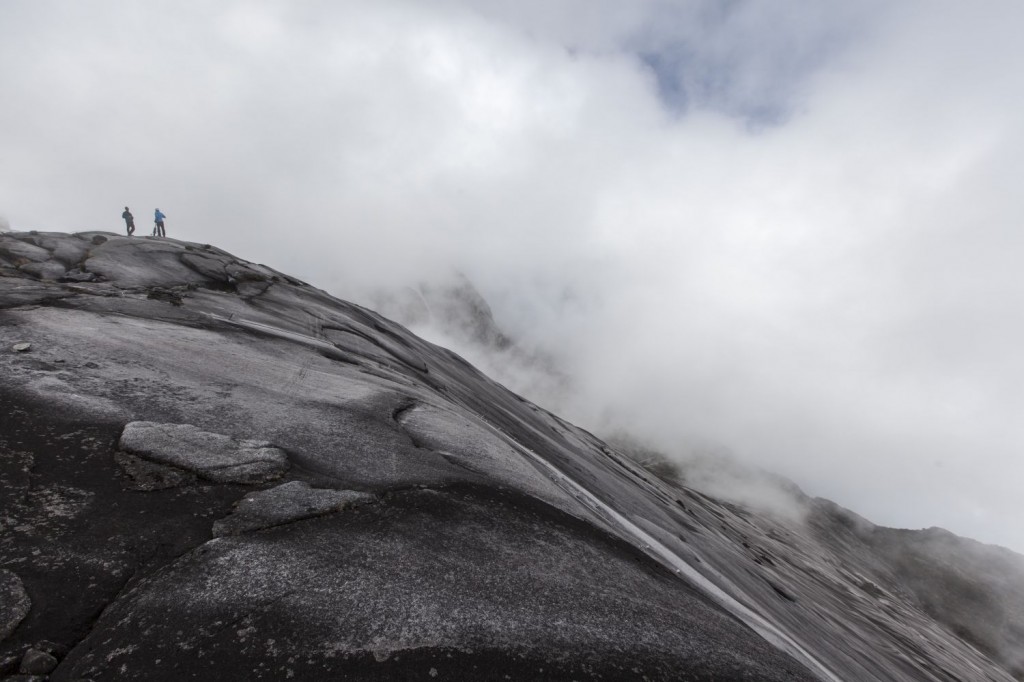 Starting a unicycle downhill ride at 4.000m had been a desire I had conceived for a long time. Since Europe has no un-glaciated mountains that high, the realization of my dream could not be put into practice by just a quick trip to the Alps. When Daniel Peis invited me to a Multi-Sports Project on Mount Kinabalu in Malaysia, I didn’t think twice and accepted. Although thrilled of anticipation I had some doubts about the prospects of success during my journey to Malaysia. Even by foot, I had not been on a mountain that high before. Because of a tight schedule I only had seven days; I hoped for good weather conditions, quick acclimatization and of course, a descent without heavy falls. That those risks would prove to be the least of my worries did not occur to me at that time.

I travelled from Frankfurt via Seoul to Kota Kinabalu – thus spending my 27th birthday on trains, planes and in stations. Due to the time difference, I wasn’t able to sleep and spent the first night in Malaysia in company of two participants of the project. I didn’t worry about not getting any sleep since the first day would not be spent at Mount Kinabalu.

The next morning we experienced a first surprise: Due to a short-term change of plan, we had to directly ascend to 3700 m above sea level. Despite the lack of sleep – I had been awake for 48 hours – my legs felt fine and the ascent went well. Fortunately, we wouldn’t have to get to the top that day but merely reach the Sayat Sayat mountain cabin which would become our base camp for the following days. I was equipped with just a small backpack since Porters was to get my unicycle and baggage to the top.

After a night of uninterrupted deep sleep, we were confronted with an unpleasant surprise the next day: The national park administration refused to get my equipment to the top since all kinds of cycling are usually prohibited there. Beforehand I had been reassured that all exceptional permissions had been granted. Obviously, something had gone wrong which led to me being at 3.700 m above sea level without my baggage – and without my unicycle. At least I had a sleeping bag.

I still was in cheerful spirits and hoped everything would clear up eventually. I enjoyed every minute on my highest and most beautiful mountain. Accompanied by a bicyclist of the team, Lyudmil Ivanov, which faced the same problem as me, I climbed the highest via ferrata in the world and spent time with the rest of the team. The Sayat Sayat cabin sheltered 10 people that had come to Mount Kinabalu for climbing, slacklining and paragliding. 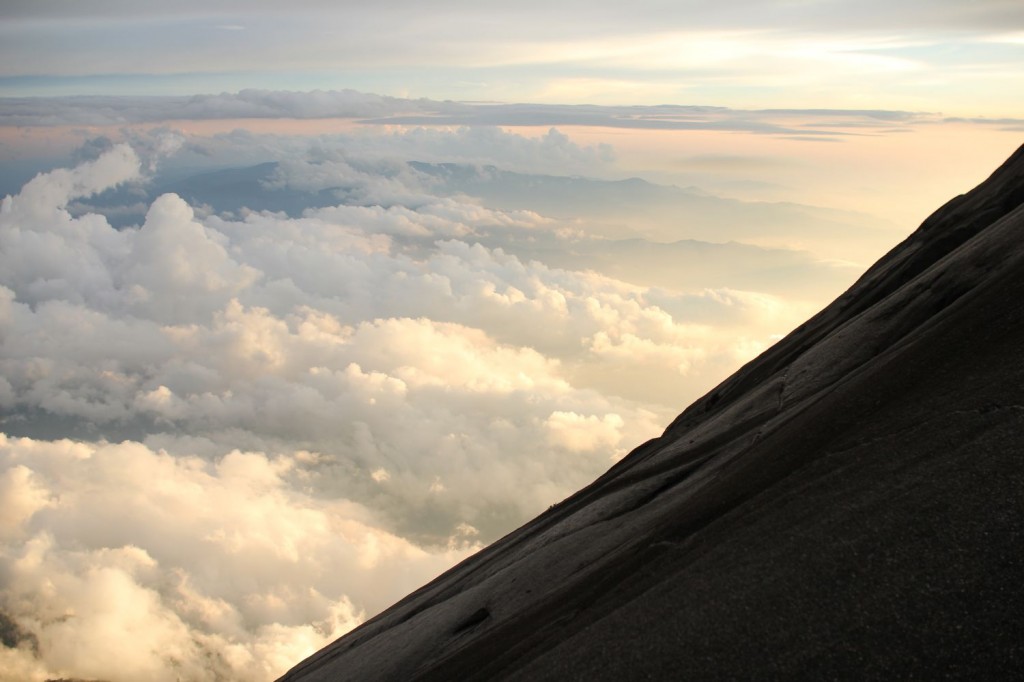 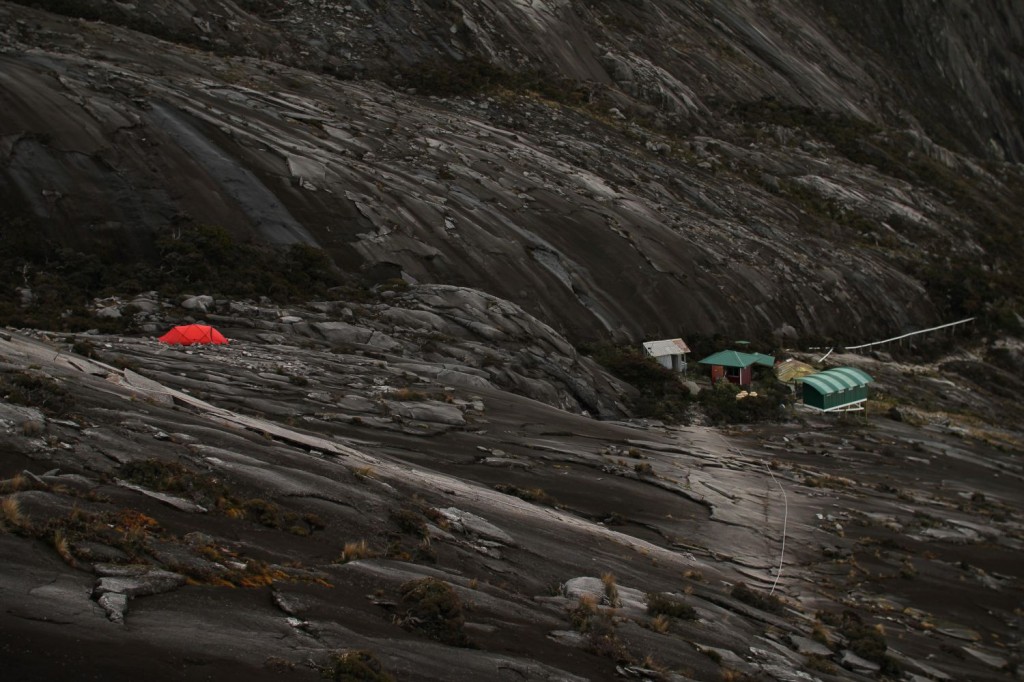 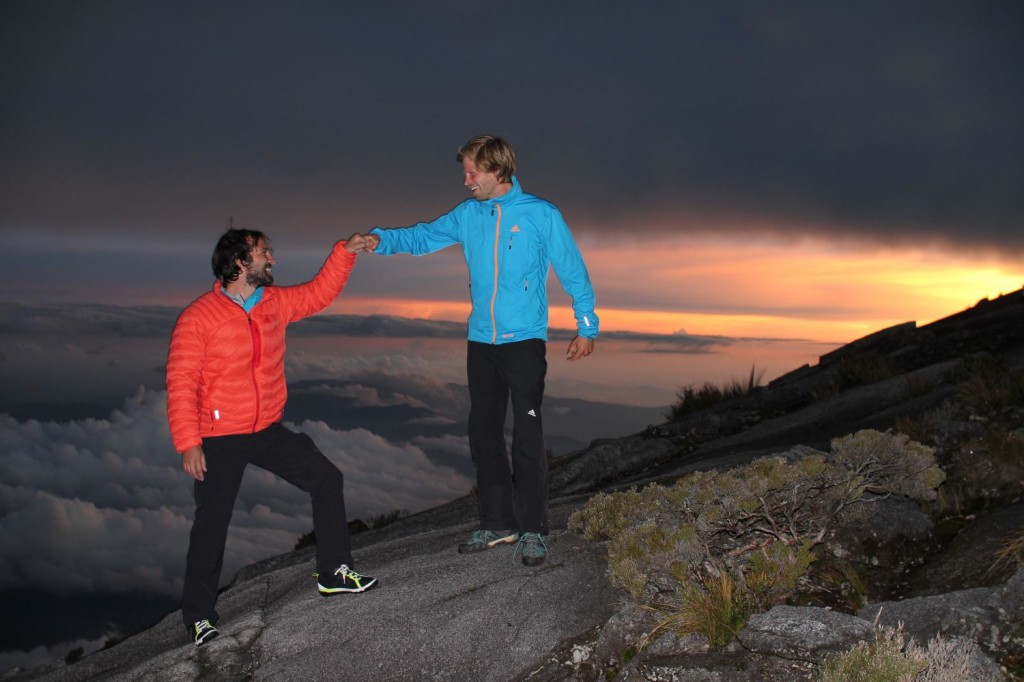 Waiting for my permit, I became more and more pessimistic in the two following days. We needed a plan B. My dream had been riding to the summit plateau – facing the aforementioned problems and fearing that this would not happen, Lyudmill and I decided to descend and look for nice trails at the foot of the mountain. But first, we wanted to climb the mountain peak by foot. At 4 a.m., our small group tried to surmount the remaining elevation gain. With each meter the view we were about to get became more and more perceptible and we felt highly motivated wandering through the fading darkness. We reached the top at the perfect time at sunset and the view was downright astonishing. We were finally able to enjoy the view of that surreal landscape in all its glory. The impressions carved themselves into my memory. Despite the awesome view, I wasn’t quite able to enjoy it to the fullest. Ultimately, I had dreamt to get to the top with my unicycle and wanted to feel gleeful anticipation towards my descent by unicycle. . 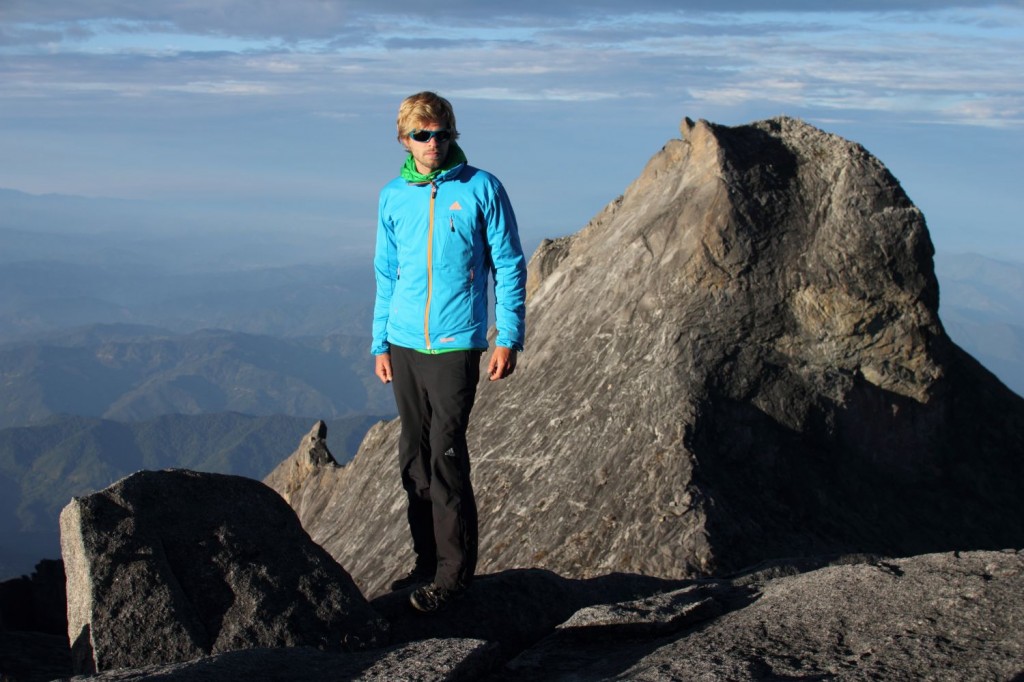 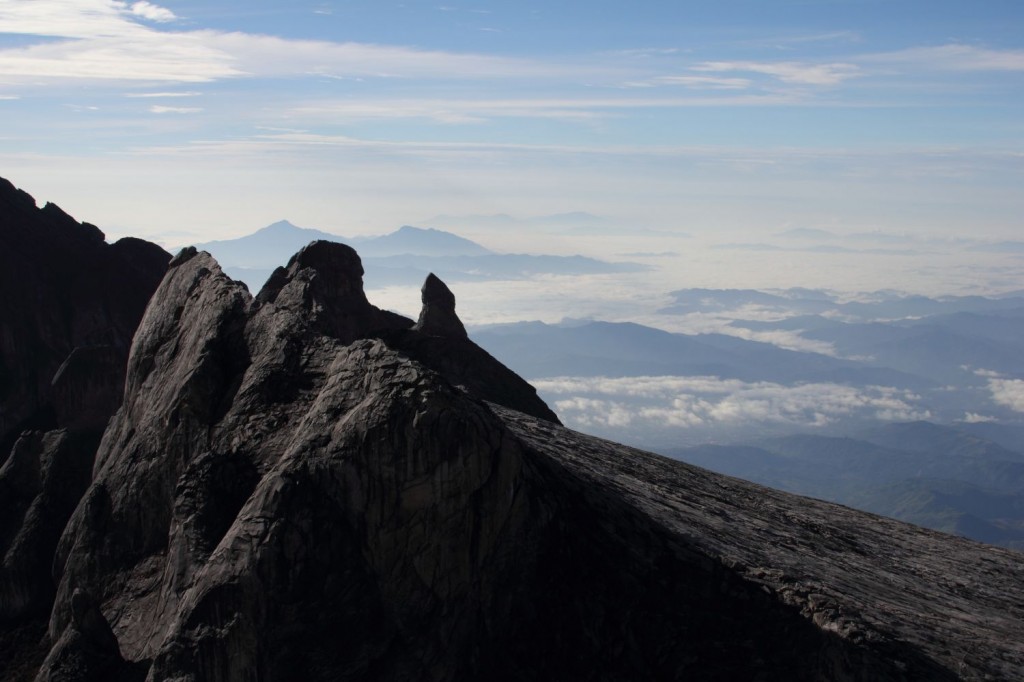 After a few hours, I descended melancholy from the summit. Trying to compensate for the lack of athletic challenge, we started a trail race with our mountain guide. Naturally, we didn’t stand a chance against the local who knew every stone and crevasse up there. Nevertheless, we really enjoyed jumping down the steep steps – not even the fact that our knees hurt afterwards could dampen our joy.

At the foot of the mountain, we traveled back to Kota Kinabalu because we wanted to rent a Jeep. Being very sleepy on my first arrival, I had not fully appreciated the city and now felt surprised by the sudden changes: From 0° to 40° Celsius; from the silent nature on top of the mountain to the seemingly orderless chaos in the city. 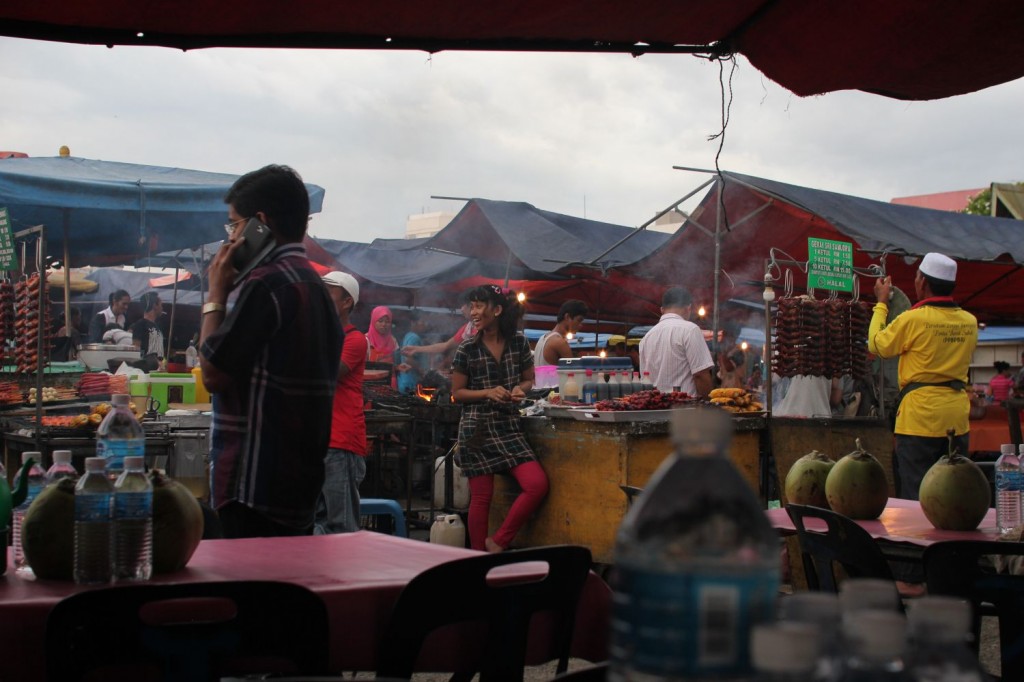 Luckily, we quickly set out again towards a rural region around the foot of the mountain looking for trails – which proved to be harder than we had initially thought. Yes, there were a lot of trails and paths, on which local farmers transported huge amounts of merchandise. But those were trails, which in Germany no one would use – not even with an SUV. Anyways – those trails did not pose a challenge for us. 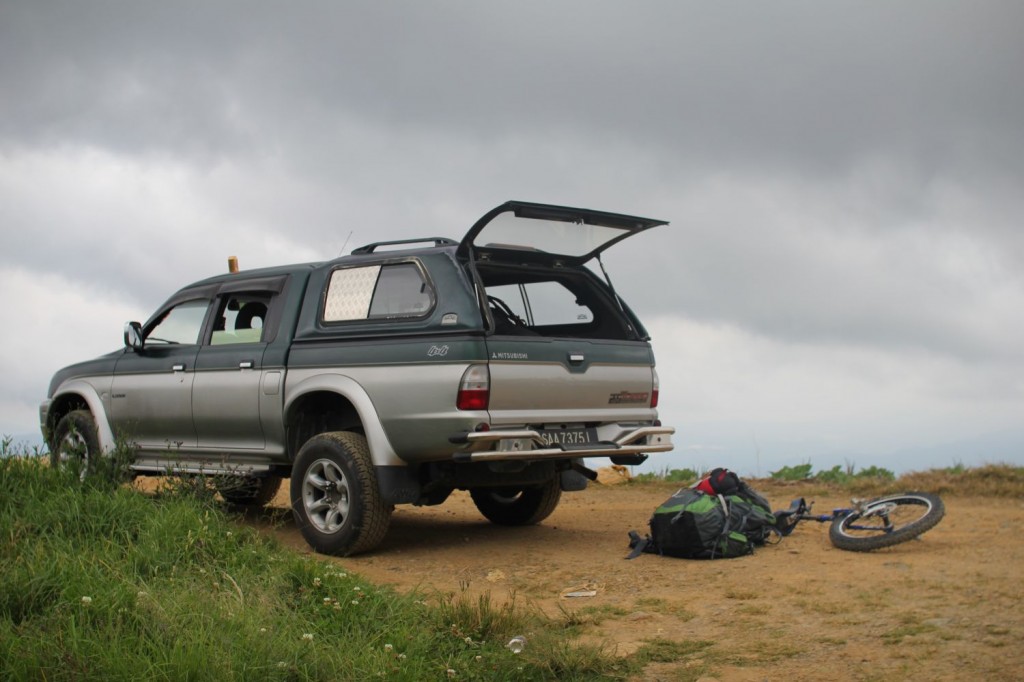 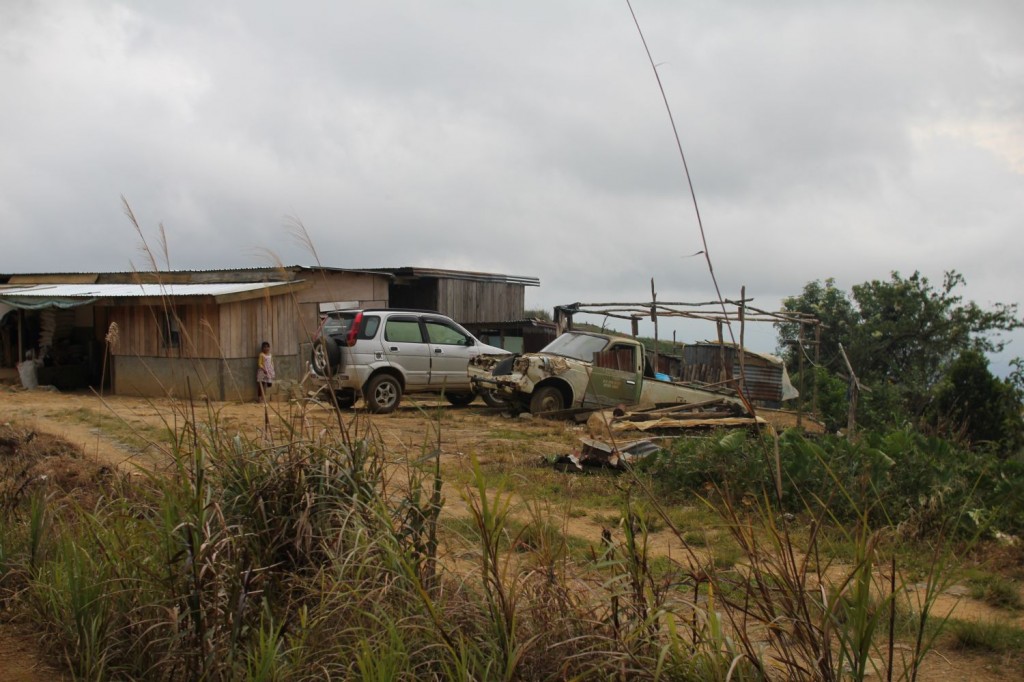 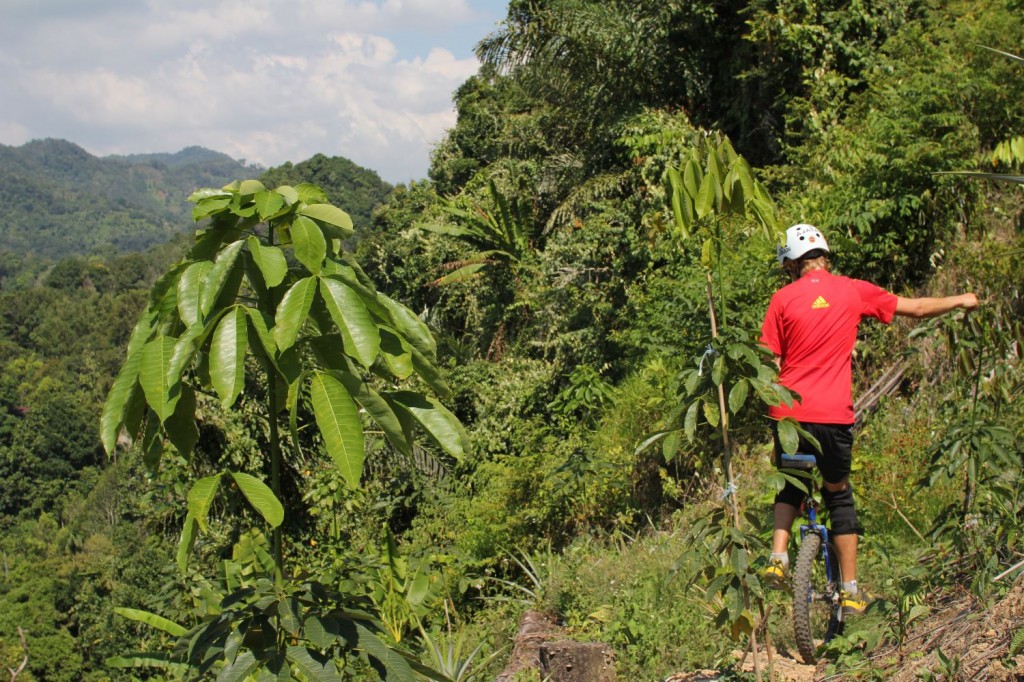 After driving around for two days, sleeping in hammocks (which we attached to our car – not a good idea unless you want to sleep in a swinging hammock!) and only a few enjoyable trails we received a surprising call from our friends at the base camp. After lengthy negotiations, they had received a new permit so we were finally able to cycle at the summit. On second thought we reckoned, that this would probably not be of any help anymore since our expedition permit would expire in a day – and only in combination with that permit doing sports on Mount Kinabalu would be allowed. Anyway – we decided to get back to the top as quickly as possible, and at least try to enjoy the last day as much as possible.

When the gates to the national park opened the next morning, we wanted to ascend to the top. We only had eight hours to overcome 2000m elevation gain and to get back just for a photo shoot at 4000 m above sea level. Despite these rather bleak prospects, Lyudmill and I began the ascent. After 500 m elevation gain I realized that Lyudmill was slowly falling back. Due to the rapid climate change, he had contracted a severe cold that weakened him. After consulting with our mountain guide, we decided to continue anyway and we reached the summit plateau within a few hours. Shortly afterwards our equipment was delivered which we weren’t allowed to transport ourselves. Finally, we were at the designated goal of our journey: Riding our bicycle and unicycle downhill, starting at a granite plateau at 4000 m height above one of the oldest rainforests on earth. The quick ascent had taken its toll, but the excitement about finally using my unicycle for what I had come for dispersed all muscle pain. The certainty, that the permit to ride down this mountain would be a once-in-a-life-time opportunity made every meter something unique and very special.

The peak provided various difficult descents. The dense cloudiness at noontide spared us from the view down the steep northern face and we were able to focus on going downhill. The granite provided great traction and rendered a controlled ride down the slopes of about 30° possible. 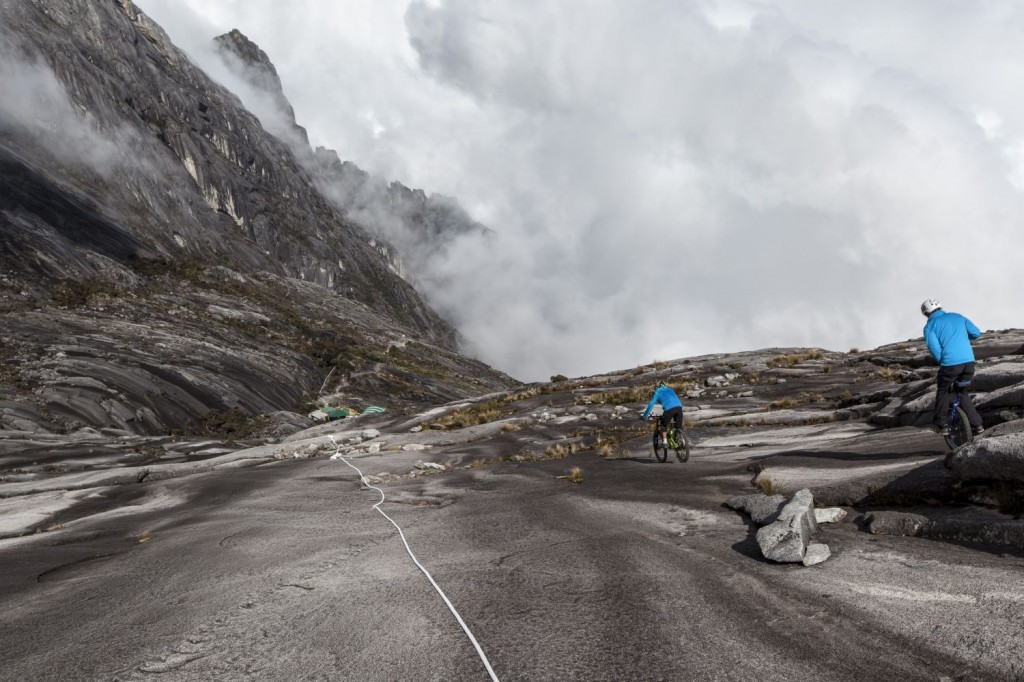 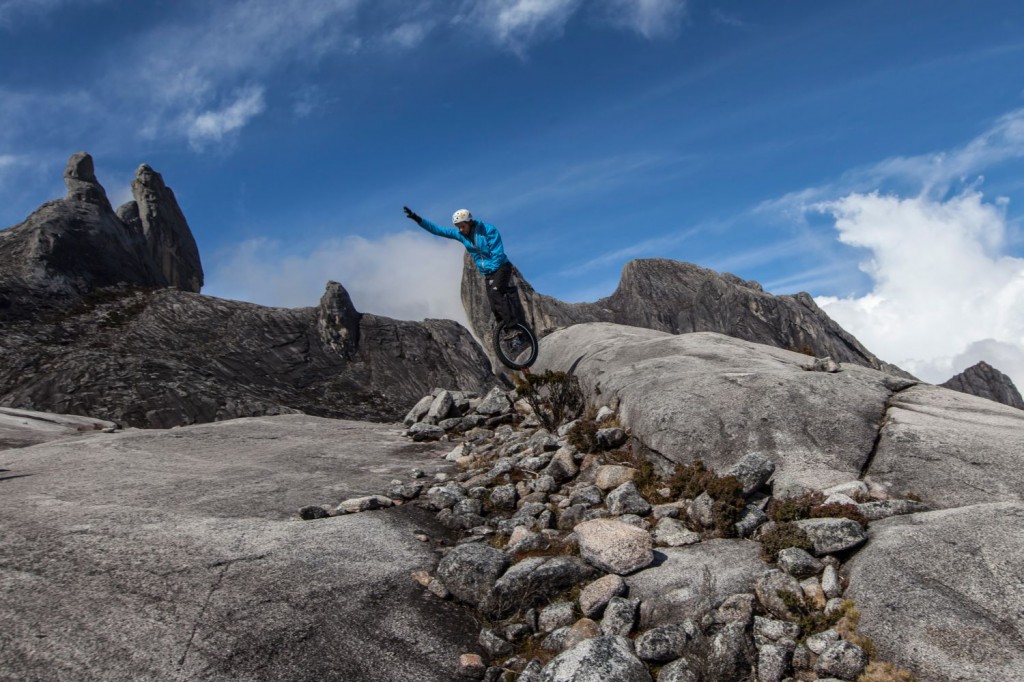 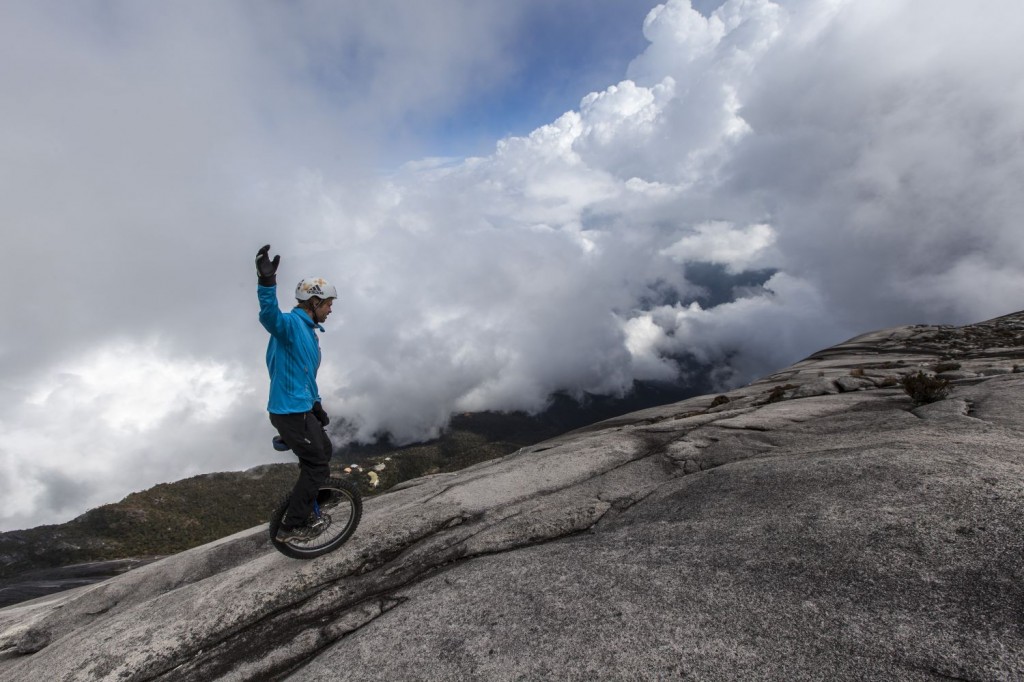 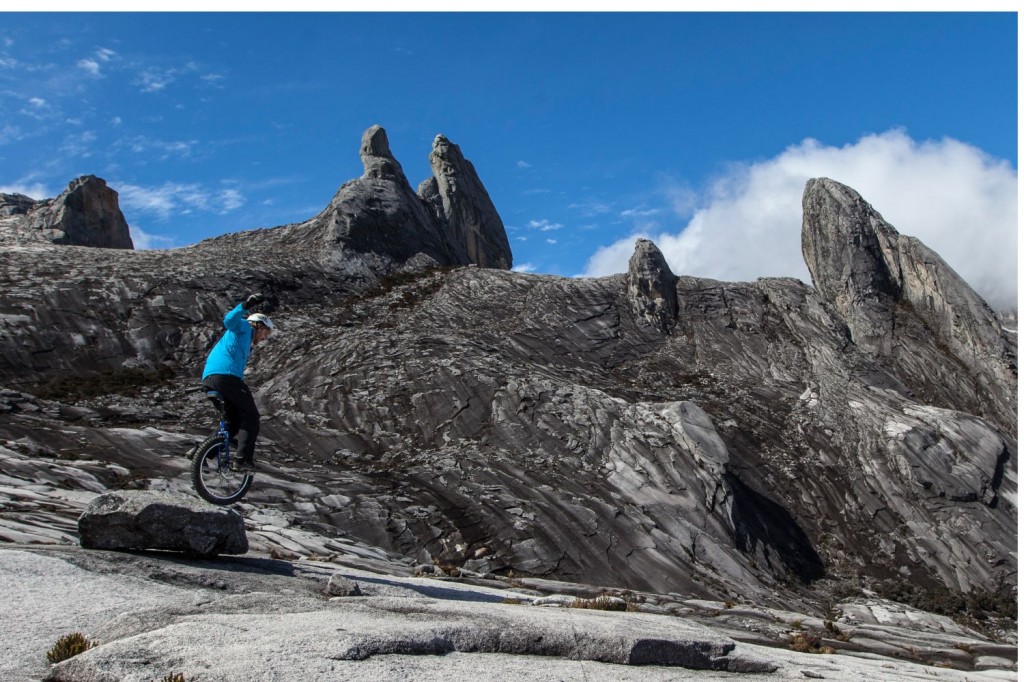 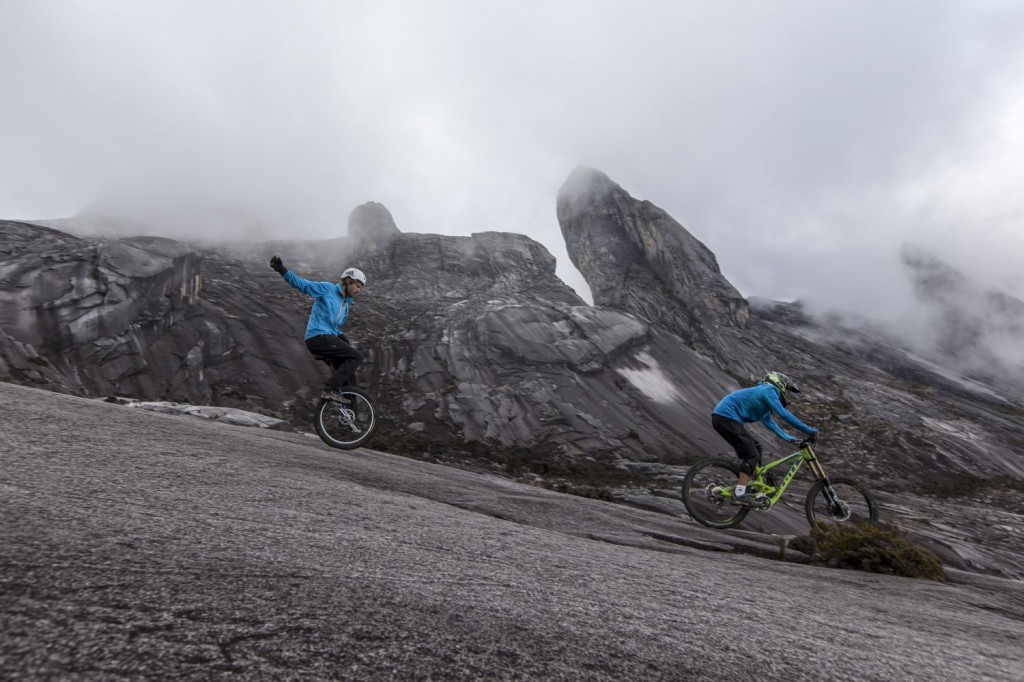 That one hour the mountain guides had given us went by in a flash and shortly after, we had to begin our descent towards Sayat Sayat, which we were allowed to do by bicycle and unicycle. The comedown went alright although I almost tripped and fell a few times. Flying back I realized I had not only acquired sore muscles in Malaysia: Despite the fact that the past few days had passed in an utterly different way than I had expected it was a beautiful experience which I also spent trying out new things like trail running and climbing a via ferrata. For me, travelling is breaking out of the regular everyday life. Experiencing new things, pushing boundaries and learning to stay calm when things don’t go my way was very important at Mount Kinabalu. This, combined with the opportunity to ride some of the hardest trails down Mount Kinabalu (at least for a short time) made this journey a truly unique experience. Pictures: Oliver Vötter